In Lowestoft UK, Jack Malik is a frustrated musician whose musical career is going nowhere despite the faith that his friend/manager Ellie Appleton has in him. However, on the night Jack decides to give up, the whole world is momentarily hit with a massive blackout during which Jack is hit by a bus. Upon regaining consciousness, Jack learns to his astonishment that he is apparently now the only one who knows the music of the Beatles. Realizing this improbable opportunity, Jack begins playing the music of the greatest of the rock bands, claiming it as his own. It pays off quickly and Jack becomes a worldwide musical sensation. However, Jack finds himself drifting away from Ellie, only realizing his love for her when she has become intimidated by his success, which depends on a blatant plagiarization that no one could find out. Now, Jack must make a fundamental moral decision about his music to satisfy his conscience as he decides what he truly needs. 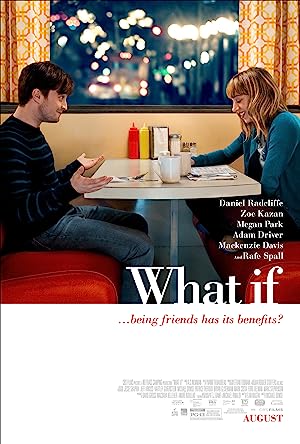 WHAT IF is the story of medical school dropout Wallace, who's been repeatedly burned by bad relationships. So while everyone around him, including his roommate Allan seems to be finding the perfect partner, Wallace decides to put his love life on hold. It is then that he meets Chantry an animator who lives with her longtime boyfriend Ben. Wallace and Chantry form an instant connection, striking up a close friendship. Still, there is no denying the chemistry between them, leading the pair to wonder, what if the love of your life is actually your best friend?

A hugely talented but socially isolated computer operator is tasked by Management to prove the Zero Theorem: that the universe ends as nothing, rendering life meaningless. But meaning is what he already craves.

Simon is a timid man, scratching out an isolated existence in an indifferent world. He is overlooked at work, scorned by his mother, and ignored by the woman of his dreams. He feels powerless to change any of these things. The arrival of a new co-worker, James, serves to upset the balance. James is both Simons exact physical double and his opposite - confident, charismatic and good with women. To Simons horror, James slowly starts taking over his life.

Small-town fry cook Odd Thomas (Anton Yelchin) is an ordinary guy with a paranormal secret: he sees dead people, everywhere. When a creepy stranger shows-up with an entourage of ghostly bodachs - predators who feed on pain and portend mass destruction - Odd knows that his town is in serious trouble. Teaming up with his sweetheart Stormy (Addison Timlin) and the local sheriff (Willem Dafoe), Odd plunges into an epic battle of good vs evil to try to stop a disaster of apocalyptic proportions. Based on the best-selling thriller by Dean Koontz.

Valentin is Acapulco's resident playboy womanizer, until a former fling, a young American named Julie, leaves a baby on his doorstep and takes off without a trace. Leaving Mexico for Los Angeles to find the baby's mother, Valentin ends up finding a new home for himself and his newfound daughter, Maggie. An unlikely father figure, Valentin raises Maggie for six years, while also establishing himself as one of Hollywood's top stuntmen to pay the bills, with Maggie acting as his on-set coach. As Valentin raises Maggie, she forces him to grow up too. But their unique and offbeat family is threatened when Maggie's birth mom, Julie, shows up out of the blue after six years after turning her own life around and wants full custody of Maggie, and Valentin realizes he's in danger of losing his daughter - and his best friend.

Scheming Bruce Robertson (James McAvoy), a bigoted and corrupt policeman, is in line for a promotion and will stop at nothing to get what he wants. Enlisted to solve a brutal murder and threatened by the aspirations of his colleagues, including Ray Lennox (Jamie Bell), Bruce sets about ensuring their ruin, right under the nose of unwitting Chief Inspector Toal. As he turns his colleagues against one another by stealing their wives and exposing their secrets, Bruce starts to lose himself in a web of deceit that he can no longer control. His past is slowly catching up with him, and a missing wife, a crippling drug habit and suspicious colleagues start to take their toll on his sanity. The question is: can he keep his grip on reality long enough to disentangle himself from the filth?

Ben Baker is a man-child who lives on his friend's couch getting high. His friend, Steve Dallas, is a moderately successful weather reporter who is living a superficial life. When Ben receives word that his father has died, Steve drives him home and they re-connect with Ben's successful and driven sister Terri and hippie step-mother Angela who is the same age as they are. The reading of the will drives Ben to come up with a new purpose in life, but those around him don't prove to be very supportive, and then they all re-examine their own lives.